Seventeen hundred and forty-six years ago I awakened amongst the stars in a blaze of fire and cinder, melded together with the elements of life and death. The essence of the Dragon Stream filled my breath and stoked my rage, and then it sent me crashing to Rynwell with a message: Save humanity.

That night I offered humanity a fragment of my heart, and in exchange they crowned me their king. In the centuries that followed I have witnessed both their morals and their greed.

​I understand now there are none worth saving.

“All things must end where they begin again.”

Rheagon Dawes has discovered a family of thirteen murdered in their farmhouse. Despite the abilities passed onto him by Dragon King Azure, Rheagon cannot unveil a trace of evidence. No indication of the weapon used. No perceived motive. Even more troubling is the surviving infant, neatly placed by the perpetrator without leaving a single, bloody footprint. Was she spared for a reason, or was she a gift from the hands of death?

Rheagon’s investigation brings him face to face with a deadly new enemy—a writhing, soul-consuming wraith forged of shadow and blood. Only the Dragon King can shield Rheagon’s people from its voracious thirst, but Azure has seemingly abandoned humanity to pursue his own, darker ambition. As the wraiths feed on his people, Rheagon undertakes a perilous, spirit-decaying descent into the Depths of Jade, where he hopes to solve the riddle of the infant and restore Azure’s protection.

But Rheagon may soon find himself broken-minded and unusually angry, haunted by the prophetic wail of an infant and a question he does not want to answer.

Why is there blood on his hands?

The Rhythm of a jaded heart

"When hatred blinds the eyes of justice, only the fury of betrayal can save them." 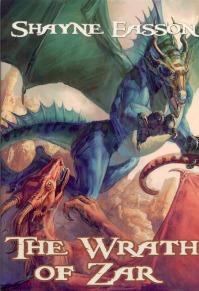 Answers armed with disaster and linked to mysteries about his father’s past thrusts Adan Caynne into a desperate quest to find his missing brother. Unaware of the evil spreading across Yannina, Adan quickly discovers that his fate is bound to a handful of others who are desperately seeking answers of their own. When an Andar apprentice suggests that Adan may be their only hope, his life is thrown into chaos as he and his new companions find themselves chased by the demon army. At the helm stand the Dryden, powerful warriors sent from their master to initiate their long awaited journey of revenge. In their alliance is the dreaded dragon Zar, awaiting his beacon to summon soul into flame—chaos into death.​

PRAISE FOR "THE WRATH OF ZAR"

“This fantasy debut by Calgary native Easson launches a saga of war and treachery, where demons threaten all that is good and a few stalwart heroes must prevail against them. A good choice for large sf collections or where epic fantasy is popular.” Library Journal, November 2007

“The fact that the narrative takes a number of unpredictable turns along the way makes the book even harder to put down, and the bombshell revealed on the very last page has me awaiting the second book in the series with bated breath. If Easson’s future novels are anywhere near as impressive as this one, the fantasy genre has a new star on its hands.” Daniel Jolley

“This book is action-packed, and full of adventure, daring and danger. There is not much more you could ask for from a fiction novel - it entertains, it takes you to a different world, and it makes you care about the characters and leaves you desiring to know what happens next.” Steven R. McEvoy, Book Reviews and More

“The Wrath of Zar is a well thought-out adventure with a remarkable cast of characters. Just when you think you have it all figured out, the plot takes another shift and thrusts the reader into another layer of intrigue. This is high fantasy at its best, powered by interesting and sympathetic characters in a unique world of men, demons, gods, and dragons.” Clover Autrey, Paranormal Romance

“In my opinion Shayne Easson has a talent for storytelling and it's easy to see that he loves writing. I think that he's about to become one of the best new fantasy authors.” Rising Shadow